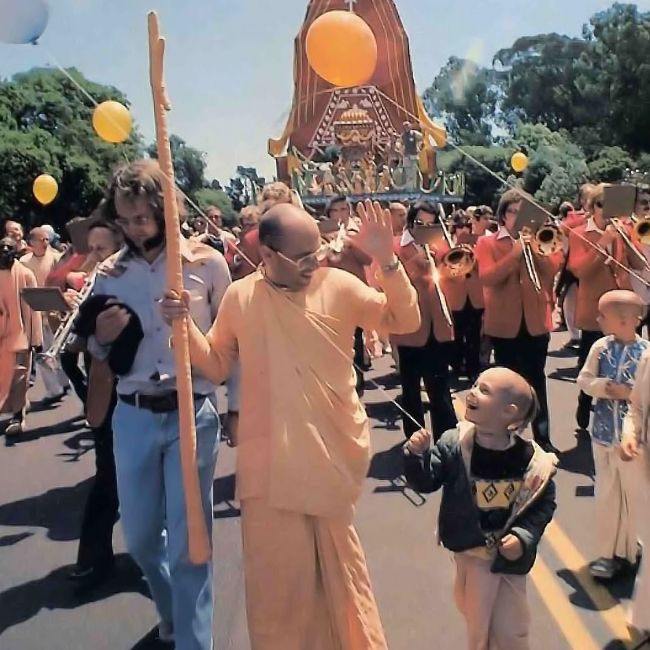 Jaya Prabhupada! Because of recent events, I believe necessary that I clarify my personal history and feelings in regards to the protection of children in ISKCON, and my feelings about the well known and tragic cases where children have not been protected.

My personal friends and associates know my history and feelings. But ISKCON is a society, not just a community, and therefore most devotees do not intimately know my history in this area. To clarify, I will openly, and honestly explain myself.

In 1971-1972, Mohanananda and Satswarupa established ISKCON’s first Gurukula in Dallas. At that time, I was a young grhastha temple president in Houston, and I came to Dallas regularly to visit my friend Satswarupa and observe the development of the school. As is well known, outside devotees at that time had no knowledge of abuse in the school.

I took sannyasa in 1972 and with Prabhupada’s strong encouragement, I preached in US colleges, chiefly in cities without temples. Thus, from 1972-1974, I spent very little time in ISKCON temples. I lived in a van, we had no internet or cell phones, and I knew very little about what was happening in ISKCON temples.

In 1974, Prabhupada sent me to be GBC in Latin America. There were few children then in Latin America, but I felt great affection for those few and would always spend time talking with them and even playing with them. My zone grew and a few years after Prabhupada’s departure, we established a Gurukula in Nova Gokula, Brazil. I engaged the best devotees we had to manage the school. I believe that Loka-saksi Prabhu, one of the first Brazilian devotees, was the first director of our school, and he eventually became my co-GBC for Brazil.

We had a policy of zero tolerance for mistreatment of children. For example, once when I was in Nova Gokula, I received a report that the senior teacher was punishing children by making them sit on their knees on large stones in the river. Upon hearing this, I immediately had that devotee brought to me and he was removed at once from the school.

Personally, I always loved children and whenever I was walking in the farm and saw children who were being punished and were missing their play time, I would tell them to go and play and that I would speak to their teacher.

When Loka-saksi became co-GBC, I requested Dhanvantari Swami, perhaps the best devotee in Brazil, to lead the school. To do this, he left his position as one of our best regional leaders. Some of you may know that several years ago, in Northeast Brazil, Dhanvantari Swami established one of ISKCON’s most successful educational institutes. Dhanvantari, who has a daughter, acted as a loving father to the Gurukula children.

During my tenure as Brazil GBC, we were not aware of any case of sexual abuse at our school. After I left Brazil, one tragic case from the past came to light.

Many years ago, after I left Brazil, we all began to learn of the terrible extent of abuse that took place in ISKCON schools around the world, both in the sheer number of victims and in the degree of evil inflicted on the children. In various ways, I tried to help. Many victims approached me and I did all I could to help them, emotionally, financially, and even legally. During the well-known Turley legal case, in which millions of dollars were given to Gurukuli victims, I was a member of the legal committee and worked long hours with my friend Amarendra, ISKCON’s main lawyer, to arrange compensation for victims.

I believe that I tried sincerely to help all those who approached me, and all those whom I was able to help, either individually or by supporting the ISKCON Youth Ministry or the CPO.

I will speak of my personal feelings about child abuse. It is not always easy, at least for some of us, to discuss an evil of such magnitude, an evil that shocks us to the core of our being. So, I will begin with Prabhupada’s own words as I heard them. Once, in 1972, I was sitting with Prabhupada on a hillside in New Vrindavana. Two little kittens were wrestling near us. They grabbed each other in such a way that they formed a round ball. They rolled on the ground and then rolled right onto Prabhupada’s lap.

Prabhupada gently petted the little kittens, who with full trust in Prabhupada, continued to play on his lap. Seeing their trust, Prabhupada looked up and said to us, “If I put my head in your lap, and you cut my throat, that is the greatest sin.”

I never forgot those words. Something like that happened to innocent children in ISKCON, and as Prabhupada said, that abuse is the greatest sin.

It is most natural for a decent person to love children, to nurture them, and to give one’s life if needed to protect them. I personally was very fortunate to have very loving parents and I never doubted for a moment that they would give their lives for me and my brothers. Having received so much love as a child, it was natural for me to feel that same love for children when I became an adult.

To sexually abuse a child, to treat a child with violence or any form of cruelty and abuse, violates the core of our humanity, not to speak of our spirituality. To abuse and harm the innocent is the root of all evil in this world. I believe in good faith that I have lived my life in accord with these principles. I know that much more needs to be done in ISKCON and along with many others, I will continue to do my best to help.

However the world may understand or misunderstand us, our shelter and consolation will always be Krishna, who knows us perfectly.