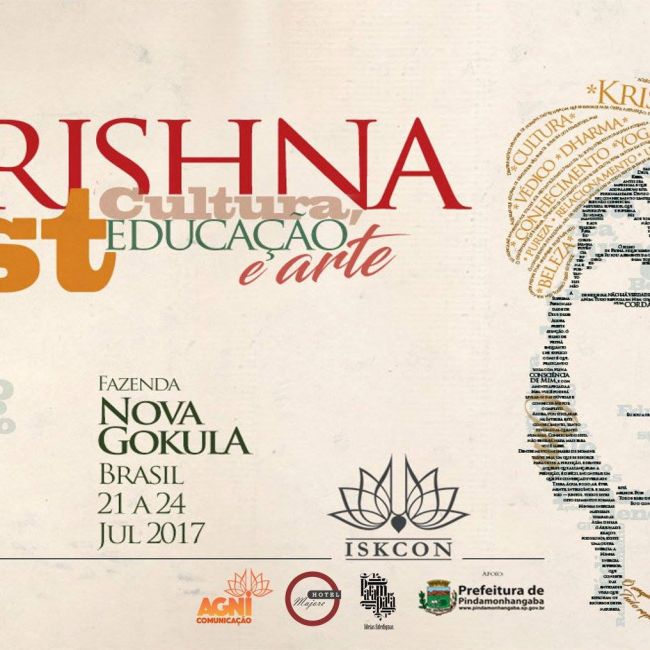 Last month Nova Gokula of ISKCON Brasil hosted the very first Krishna West International Festival. Hundreds of devotees and friends from all over the world came to take part in classes and seminars, celebrations, and to engage themselves in Srila Prabhupada’s mission. We reached out to those who attended, and asked them to provide us with their thoughts and feelings on the Festival.

Below you can read what they had to say. Photos are included, or you can click here to view the Gallery.

The first Krsna West International Festival took place in a climate of great harmony and cooperation, contrary to some of the expectations that were raised during the planning of it.

The presence of H.D.Goswami was the link that united all the generations of devotees participating, from their spiritual brothers to the younger ones, all curious to know about the Krsna West program or how to be useful in its implementation in Brazil.

I summarize Krsna West in one word: compassion.

The program focuses on “preaching” so that it can efficiently reach each soul within its socio-cultural reality.

Despite being in a state of implementation, thus susceptible to adjustments, the Krsna West movement has already shown its importance and success, since it has reconquered many dissatisfied devotees with various aspects of the ISKCON institution and renewed the enthusiasm of many others, as it reveals a more humane, intelligent and sensible way of giving Krsna consciousness to people in general.

I believe that, at least in the face of the credentials of Krishna West’s proposal, of the current unfocused growth in the West, of the lack of other achievable proposals and of the desire expressed by a considerable portion of devotees dissatisfied with the current model of ISKCON in the West, leaders should give due attention and respect to the Krsna West program, analyzing it objectively.

I support the Krsna West movement, and as far as possible, I try to adjust its principles to my particular way of teaching Krishna Consciousness.

END_OF_DOCUMENT_TOKEN_TO_BE_REPLACED

Two months ago since the launch of Krishna West, Hridayananda das Goswami has been speaking with ISKCON leaders throughout the world regarding the role of Krishna West and the importance of expanding ISKCON’s western preaching mission.

We call this movement Krishna West because we do everything possible to make bhakti-yoga easy, relevant and enjoyable for Western people, without in any way compromising, diluting, or diminishing the purity and power of a glorious ancient tradition. We do this by offering the essential spiritual teaching and practice in its entirety, without requiring students and practitioners to embrace a new ethnicity composed of non-essential Eastern dress, cuisine, music etc. People in the West need and deserve the chance to practice genuine bhakti-yoga within an external culture that is comfortable and natural for them.

Since learning about Krishna West, many ISKCON leaders have embraced the project and are now eager to participate. Other leaders have volunteered to systematically correct any misunderstandings within ISKCON regarding Krishna West’s mood and mission. In response to the enthusiastic support and encouragement, Hridayananda das Goswami explains, “It is so clearly Krishna. I’m just trying to do my part and not get in Krishna’s way!”

Since our posting of the Krishna West mission statement, we have received a tremendous amount of feedback.

We sincerely thank everyone for their inquiries and apologize if we are unable to immediately answer every question. In an effort to better serve you, we are compiling an ongoing list of frequently asked questions regarding Krishna West. These questions, along with answers given by Hridayananda das Goswami, will be continuously updated and published here.

In addition, we have posted links to several of Hridayananda das Goswami’s lectures in which he gives elaborate explanations of Krishna West and discusses the importance of developing this project as a means of restoring ISKCON’s Western preaching mission. These links will also be continuously updated and can be found here.

Again, we are most grateful for your feedback and encourage further inquiries. Thank you for your support & Hare Krishna!

Krishna West is a spiritual movement that serves the world through the teaching and practice of advanced spiritual knowledge found in ancient texts such as Bhagavad-gita and Srimad-bhagavatam. As one of the oldest, most cherished treatises on the philosophy and practice of yoga, Bhagavad-gitaexplains that we are all eternal spiritual beings. We have always existed and always wlll exist. Only our temporary body is born and dies. Compelled by the reactions to our worldly actions (karma) we wander through many lives until we clearly grasp our eternal identity as souls, and our loving relationship with an infinitely beautiful, all-knowing, and ever youthful God, Krishna. Krishna West teaches the timeless, non-sectarian path of bhakti-yoga, devotion to God and all souls. Bhagavad-gitadescribes bhakti-yoga as the highest stage of spiritual yoga.